“70 weeks (שבעים שבעים) are determined…,”[1] where if each of the weeks (שבוע)[2] is considered a 7 (heptad) year period as the Hebrew sabbatical cycle and subsequentially divided into 3 parts would become:

In Daniel 9:25 the phrase “Know therefore and understand” (ותדע ותשכל) is used to indicate a decree has occurred somewhere.

Of which a count will start, the terminus ad quo: “…from the going forth of the commandment to restore and to build Jerusalem.”[3]

There are at 3 different decrees that are considered in an attempt to know therefore and understand the beginning of the 70 weeks of Daniel:

Daniel 9:25 states: “And after 62 weeks (triumphal entry into Jerusalem 33 AD) Messiah will be cut off and have nothing”, favors the decree 3 scenario.

We now enter the area of the greatest controversy concerning the 70 weeks prophecy where are two views:[9]

It is time to finally settle the score with the Universal Syphers™ using the WikiSyphers platform which will demonstrate that what is needed for the futurist view to come true is a new view; a third view, the historical-futurist view.

The two charts of Daniel 9’s new historical-future view illustrate that the second coming has already occurred, the historical view part, with the futuristic gap concluding with the years of 1947-1953 AD, the futuristic part after the gap after the 69 weeks. The mid-point of the 70th, 1 week or 7 years of Daniel 9:27 occurred in 1950 AD with the beginning of the Korean War and the Great Tribulation of Matthew 24. The Antichrist’s reign ends the second 3 ½ year period and the 70th week 7 year period in 1953 AD with the death of Joseph Stalin, the antichrist figure of the Second Advent, counterpart of the Second Coming of the returning Christ.

The 70th week 7 year period of 1947-1953 AD is also paralleled to the 7 seals of the book of Revelation with each seal symbolically representing 1 year of the 7 years.

For those who like to take things a bit further using Daniel 9’s prophecy et.al. after the 70th week or 7 years of 1947-1953 AD, called in the Universal Syphers™ the Period of Suffering, Prison and Liberation and representing the 7 vials of the book of Revelation is the Period of the Church with Controversy and Growth covering the period of time of 1954-1960 AD beginning the second coming. After this period is the 40 year Period of the Parents Holy Wedding when Christ reigns begins covering the period of time of 1960-1999 AD initiating the beginning of the millennial reign of the returning Christ through the cusp of the Aquarian Age in 2000 AD, which mathematically begins in CE 2104 and continuing through to CE 3063.

This is a consistent, coherent and verifiable timeline of the returning Christ, the new historical-future view that is the only way to make the numbers work out. 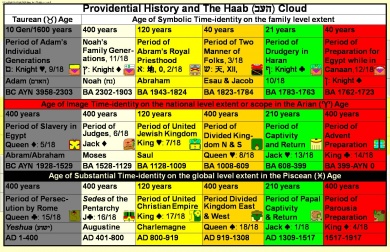 For those who like additional information more than just the limits of Daniel 9’s prophecy check out this chart of the Providential History that illustrates the simplicity of God’s providential plan for all of history over the course of the last 3 Astrological Ages of Taurus, Aries and Pisces.

Providential history is divided into 3 periods of which each has 6 parallel sub-periods that coincide with the sub-periods of the other 2 vertical periods in nature and providence: